Jesus Christ – The Earthly name of the Devil?

Report an abuse for product Jesus Christ – The Earthly name of the Devil?

Let us examine in more detail the doctrine of the virgin and the immaculate conception. This dogma is one of the basic religions of Christianity and was established in 431 at the Third Ecumenical Council in Ephesus, that is, four centuries after the death of Jesus. The dogma is based on deliberately made inaccurate translations, replaced words and correspondingly free interpretations of the original texts of the prophets of Tanah (Old Testament). This is, perhaps, the most essential and extremely important example of a purposeful replacement of words that has led to erroneous translations and false interpretations of the long religious history of mankind. The dogma of virginity and the immaculate conception, as we have said, is one of the main dogmas on which Christianity is based. This dogma claims that a virgin gave birth to the Messiah Jesus Christ, through miraculous and blameless conception in which God Himself participated through the Holy Spirit, and thanks to the supernatural act appeared to the world and the Son of God. This so basic dogma in Christianity is written in the Matthew Gospel as follows:

„The virgin will conceive and give birth to a son, and they will call him Immanuel” (which means “God with us”) – (Matthew 1:23).

Thus the Christian religion “proves” one of its main dogmas, referring to a text in the Book of Isaiah (the prophet Yeshaiahu Ben Amotz) in which the prophet prophesied the immaculate conception of Jesus Christ:

„Therefore the Lord himself will give you a sign: The virgin will conceive and give birth to a son, and will call him Immanuel.” (Isaiah 7:14).

At first glance, there is no difference, but in fact only one word that is specifically altered changes the whole meaning not only of the text but also of the Christian dogma as a whole. The word that is written in the Christian New Testament is the Greek parthenos (virgin), while in the original Hebrew text of Isaiah the prophet in the Old Testament is the word alma (העלמה – young woman)! This word was written initially personally by the Prophet as an alma (a young woman), who apparently is neither a virgin. It is well-known that the dogma of immaculate conception holds a great deal of the ideology of Christian doctrine. Deprived of this dogma, the doctrine is deprived of God the Son, and therefore Jesus becomes an ordinary man. 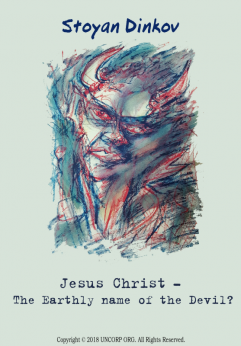 You're viewing: Jesus Christ – The Earthly name of the Devil? €3.00
Add to cart