It is assumed that approximately one million years ago, the emerging gene miR – 941 has become the cause “Separating” the man from the monkey. As science explains genetics “separating” one species from another, be it animal or plant, is due to genetic alterations due to mutations, and so on. The perception that gene miR-941 appears “Fully functioning” as one extremely short time manages to “modify” the monkey, turning it into “Prachovec” or “archantrop”, should be explained with palaeogeographic global cataclysms – abrupt and overwhelming changes to the planetary climate accompanied by an increase in the radiation background. Until recently, scientists “had no doubt” that Neanderthals are only one subspecies of Homo sapiens and them classed too boldly under the name Homosapiens neanderthalensis. The other subspecies were even more “brave” such as Homo sapiens sapiens, which should anatomically be represents the modern “reasonable” person. Today, however (at least so far) scientists have once again adopted “unanimously” that the Neanderthal differs significantly from the modern one but they assume that the two species have developed in parallel. It is assumed that “the two types” of people share even common predecessor.

Some researchers even suggest that before 4500-4000 years in Europe has happened “something” as a result carriers of Hg R1a practically disappear from the continent. Most scholars believe the cause is “natural cataclysm”. But why, in turn, we do not suppose they are perjured “hostile Martians”? If she had “disappeared” only Hg R1a1, we would have guessed it exploded, for example a volcano, selectively choked the representatives specifically this genetic line. But at the same time from huge regions of the continent disappear and Hg I1 and in significant degree Hg I2. We will make the logical assumption that Hg I was represented, albeit transparently, on geography of the entire continent, and in that state it was easy “Swept away” by the “invaders of the Carthagin”, something that appears from the “geography” of the modern genetic map. 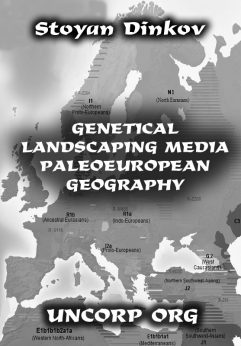